The city where you can feel the spirit of japanese God.

About The Mystery City: Fuchu

Fuchu City is surrounded by the abundant nature of the four seasons. Located in the western part of Tokyo, Fuchu is also known for its many remaining historical areas and for its location along the Koshu Kaido Road that flourished as an important highway during the Edo Period (1603–1868). It is a mystical place where fresh, flowery scenery coexists with historical architecture. We invite you to visit “The Spiritual City, Fuchu”. 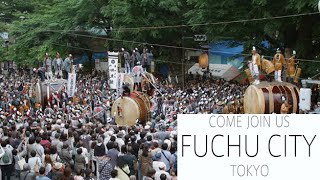 How to Enjoy Fuchu

There’s much to discover, from the great historical sites and rich nature to the magnificent sporting facilities. We also recommend Tokyo Racecourse, the Suntory Musashino Brewery where you can observe the brewing process of the renowned Suntory beer, and other exciting locations. 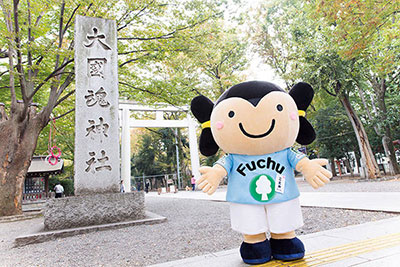 This is one of Tokyo’s oldest and most dignified shrines, with a history of 1,900 years. A vibrant air pervades the precincts of the shrine where visitors can enjoy the well-preserved cultural properties in the treasure house as well as the historical documents at the Furusato Fuchu History Museum. The lines of Zelkova trees at the Baba-Daimon Gate along the path to the shrine—which have been collectively designated as both a National Site of Scenic Beauty and a National Natural Monument—are also quite beautiful. 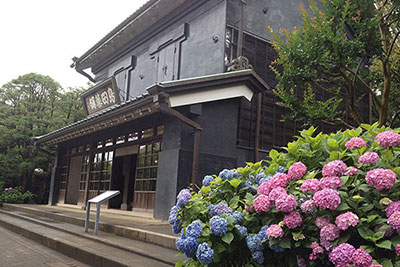 The museum park boasts spacious grounds with wildflowers blooming throughout the seasons. Here, you can engage in experiential learning about the city’s local culture, history, and nature. There is also the Taiken-kan where you can try out various kinds of handicraft, an exhibition displaying restorations of traditional Japanese houses, and the newly opened planetarium—it’s enough fun for the whole day! 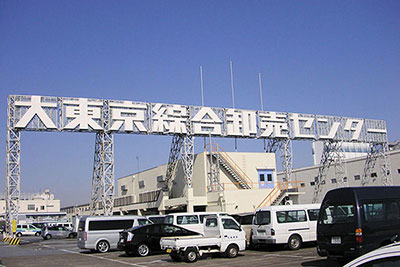 Established in 1966, this historical market is bathed in a unique atmosphere that harkens back to yesteryear. There are roughly 70 shops lined up and bustling about with the freshest fish, meat, vegetables, and daily products they have to offer. The market also hosts giant tuna filleting shows and offers freshly prepared sashimi. You can enjoy meals there as well. 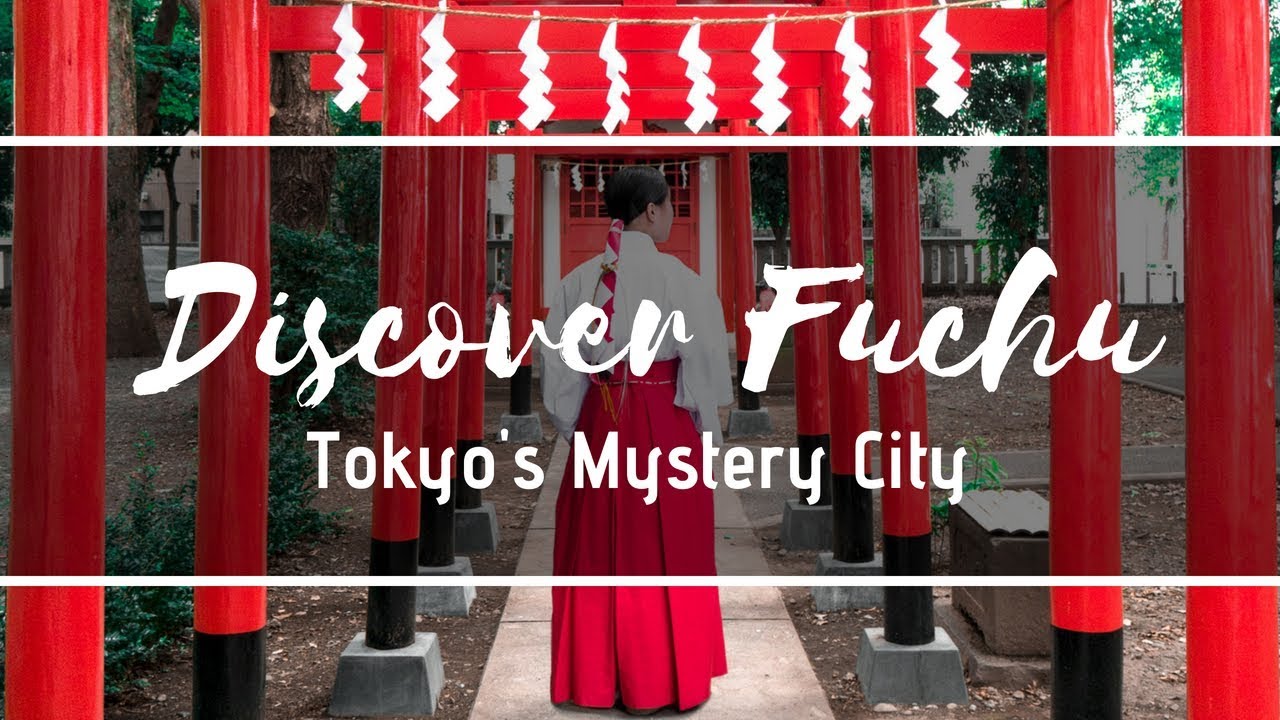 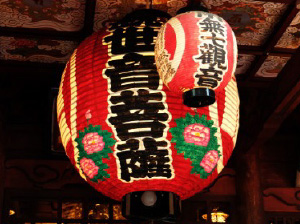 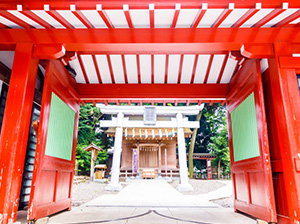 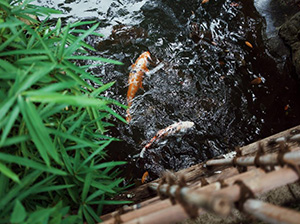 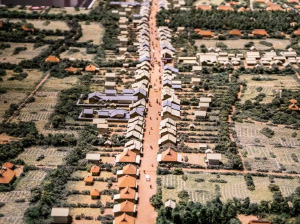 Fuchu boasts a variety of festivals, from ritual ceremonies dating back ages past to contemporary events such as digital illuminations. Every year, scores of visitors come for the charming floral events to admire seasonal plum blossoms, cherry blossoms, and hydrangea. 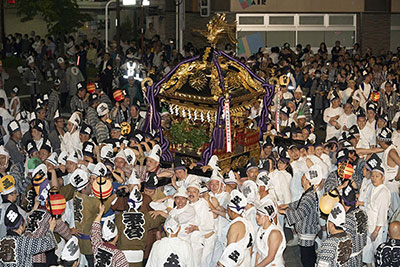 Designated by the city of Tokyo as an Intangible Folk Cultural Asset, Kurayami Matsuri is the biggest and most important annual festival held at Okunitama-jinja Shrine. It runs from April 30 to May 6 and is jam-packed with amazing things to see. Witness parades of portable shrines known as mikoshi, giant taiko drums, and impressive floats, as well as joint musical performances and a traditional ceremony known as Komakurabe in which six horse riders race along the main road. This festival is held every year in early spring, typically from February to March. Fuchu Municipal Museum Kyodonomori—where the festival takes place—is situated on a vast plot of land with enough space to relax the day away. The grounds play host to 1,100 plum trees spanning 60 unique species; when in full bloom, they provide iconic Japanese scenery balanced with the traditional architecture on the grounds. Special events are held during the festival, including tea ceremony and performances with koto harps and shakuhachi flutes. More than 20 spots around Fuchu set the stage for this street Jazz festival. Over 100 bands join in, putting the whole of Fuchu in a jazzy mood. This classic fall attraction welcomes large numbers of visitors every year—and best of all, it’s free!

Fuchu was once the location of the kokufu (provincial capital) of ancient Musashino Province; one can find many historical sites here, such as the Kokufu Ruins and ancient burial mounds. Fuchu flourished during the Edo Period as a waystation for people to come and go along the Koshu Kaido Road, an important path that connected Edo to Kai Province (modern-day Yamanashi Prefecture). 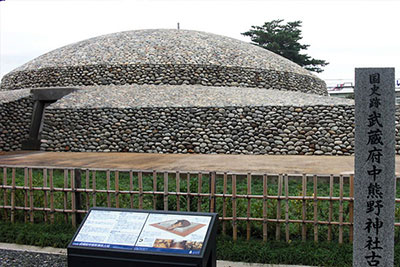 Housed in this ancient burial mound—said to have been constructed around the seventh century—are the tombs of influential figures of ancient Musashino Province. Scholars believe that it is the oldest and largest burial mound in Japan, and it is all the more intriguing for having a rare round-top, square-bottom shape. Visit the adjoining museum to learn more about this highly valued piece of history. Koan-ji Temple has long been associated with Takauji Ashikaga, a military general who founded the Muromachi Shogunate in the 14th century. The temple precinct is enveloped in a calm and tranquil atmosphere, replete with many cultural properties including the majestic main gate, bell tower, and the tombs of certain historical figures. Tokyo has selected the temple as an historic architectural landmark. 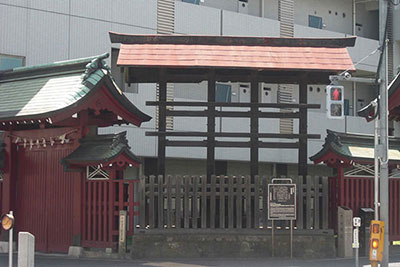 Spotted around the intersection of the former Koshu Kaido and Fuchu Kaido roads, the history of this landmark dates back more than 300 years ago to the Edo Period. Here, the shogunate would exercise its authority by posting wooden notice boards known as kosatsu to show locals updated political policies or prohibited acts. As this Kosatsuba remains in the condition it was used in, it is both very rare and very valuable. Soba noodles are quite popular as a healthy Japanese delicacy. Here in Fuchu are scores of renowned soba restaurants, including some long-standing establishments with more than 300 years of history. There are also many ramen restaurants lined up along the Keio Line, which makes this area competitive for ramen quality; you’re sure to find many stores that are confident in their noodles’ flavor. Kuromai, a local product of Fuchu, is a sticky rice with a characteristically unique flavor and texture that has been eaten since ancient time. Many varieties of local cuisine incorporate black rice, such as Black Rice Doria and the “Ancient Rice Roll Cake” made with strains of wild rice similar to those used in ancient times. 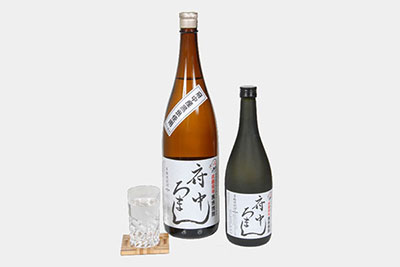 A true rice shochu made with 70% locally produced rice and 30% black rice. It is available at around 20 liquor shops in the city, making it a perfect souvenir. Especially popular is Fuchu Roman, a three-year distillation characterized by its beautiful amber color and refined taste.

Stay in a Hotel